Move our bills out of committee before the deadline!

Go to the Action Network link to support five Massachusetts Indigenous-centered bills by sending this automated letter to legislators asking that bills be reported favorably out of committee.

Click here to download the flyer with information about the legislation and the campaign to prohibit Native American mascots in Massachusetts schools.

The National Congress of American Indians and multiple tribes have issued calls for a prohibition on all Native American sport team mascots, logos, and nicknames in Massachusetts public schools: 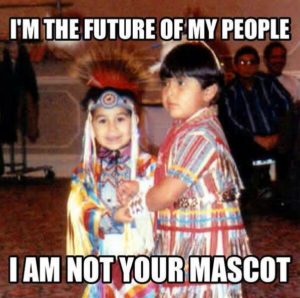 Flyer with the following information can be downloaded here.

Bill Title: An Act Prohibiting the Use of Native American Mascots by Public Schools in the Commonwealth

This bill would prohibit the use of Native American mascots in Massachusetts public schools. About 25-30 schools in the Commonwealth currently use such mascots. As proposed, the legislation includes the following mandate: “The board of elementary and secondary education shall promulgate regulations prohibiting public schools from using an athletic team name, logo, or mascot which names, refers to, represents, or is associated with Native Americans, including aspects of Native American cultures and specific Native American tribes. The board shall establish a date by which any school in violation of said regulations shall choose a new team name, logo, or mascot.” Sen. Joanne Comerford, Democrat for Hampshire, Franklin and Worcester is Senate sponsor. House sponsors are Rep. Tami Gouveia for 14 th Middlesex District and Rep. Nika Elugardo for 15 th Suffolk District

Studies have shown that when non-Native people are exposed to Native American mascots, this triggers negative and stereotypical views of Native Americans. These mascots normalize culturally insensitive behaviors and teach an inaccurate understanding of Native American people. These problems are compounded by limited media coverage, and insufficient curricula at all grade levels on the histories and contemporary lives of Native peoples (including colonial U.S. policies of removal and extermination, and facts about contemporary Native tribal nations) that would give students a more accurate frame of reference with which to understand problems with these mascots and other Native American stereotypes.

According to 2019 data from the Census Bureau, there are more than 50,000 Native American people living in Massachusetts, many of whom attend Massachusetts public schools. Native American mascots are likely a violation of state and federal anti-discrimination laws, including the Massachusetts Anti-Bullying Law. Often school districts fear community backlash and so fail to fulfill their legal responsibility to protect all students from this discrimination. Civil rights issues should never be decided in the court of public opinion. Municipalities must not be allowed to violate civil rights laws because of community resistance to change.